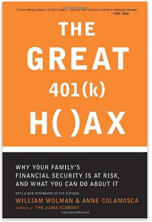 The 401(k) will turn out to be the greatest systemic financial hoax ever perpetrated on an unsuspecting public. On paper, it ‘looks’ good but the reality is quite different. Is Your 401(k) A Total Scam?

Where did the pension of our parent’s generation go? What did the 401(k) help? Well, let’s see. Firstly, it allows the federal and state governments to own a part of your retirement nest egg and the growth, a huge part! About 30% for most people. You have a 401(k) worth $500,000, only about $350,000 of it is yours. Secondly, 401(k)s convinced, otherwise very bright people, to put all their retirement eggs into the Wall Street poker game that they know nothing about. Again, huge amount. Baby boomers have anted up about $16 Trillion and they have no idea how to play the ‘game’. Ahhh, who does that benefit? Well ask yourself, who would it benefit if you sat down at a table with a group of professional poker players, and you do not know how to play. Just sayin’.

The American public has been deceived:

401(k)s were established to satisfy the interests of government and corporations, not the interests of working Americans. The 401(k) represents an implicit promise to middle-class Americans that they can live off the income that they receive from taking risk in the stock market. It is a promise that is impossible to fulfill.

“It appeared as a device that made it easy for the average worker to participate in the biggest boom in history. It seemed the 401(k) would be a perpetual wealth machine for each and every member of the great American middle class.” Unfortunately, it has not only put your nest egg at risk, it has put your family’s financial security at risk. I hope it is not too late for you to do something about it.